Oregon is one of the most partisan states in the nation, probably second only to California.  Both are one party – Democrat, of course – states, and both are really bi-partisan states.  In California, LA & San Francisco are heavily Democratic as is Sacramento.  The rest of the state is purple to red.  Oregon has one blue area – Portland – and the rest of the state is very red.  Portland has over 50% of the population in Oregon making it nearly impossible for a Republican to win a statewide election.

Here’s a quick look at Oregon’s races this year. 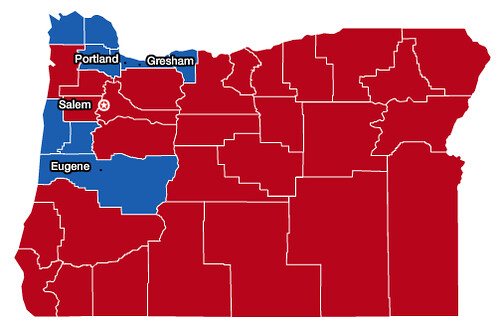 The Congressional races really weren’t that close.  Oregon has five congressional districts and Democrats won four of them.  The statewide totals are deceptive because the one Republican winner won by 120,000 votes with 70% of the vote.

In the Governor’s contest, incumbent Governor John Kitzhaber is probably the most incompetent Governor in the US.  He was one of the first Governors in the nation to embrace ObamaCare and got on board early with their ObamaCare website, CoverOregon.  They spent almost $300 million for a website that never enrolled a policy holder.  They scrapped the state website and moved to the Federal website just before the election.  In addition to that fiasco, Kitzhaber’s main squeeze, his long time girlfriend, admitted, again just before the election, that she married an Ethiopian in 1997 so he could gain US citizenship.  They split up shortly after he was granted citizenship.  That’s a felony, but the statute of limitations was up so she couldn’t be prosecuted.

You’ve got an incompetent governor with a felonious girlfriend who wins reelection.

And then you’ve got Jeff Merkley the incumbent US Senator.  Early on he was considered vulnerable because he’s a generally lousy senator and he won in a squeeker in 2008 when Barack Obama got nearly every vote in Oregon.  He won going away.

We said all that to make the point that Oregon is an overwhelmingly Democratic state.

Also on the ballot earlier this month was State Ballot Measure 88.  This measure was designed to allow illegal immigrants to get driver’s licenses without the bother of having to prove citizenship or legal residency.  Since amnesty and “fairness” are two lynchpins of Democratic politics, we’d have thought Measure 88 would have won in a walk.  The deck was certainly stacked against it.

Last year a state law passed the Democratic legislature and was signed by the Democratic governor giving illegal aliens the right to get a driver’s license.  Measure 88 was designed to overturn that law.

The state law had seemed to be popular. It easily passed last year with bipartisan support in the Democratic-controlled Legislature and was signed Democratic Gov. John Kitzhaber, who was re-elected Nov. 4.

Still, the measure failed in every county but the state’s most liberal one, Multnomah, home to Portland. Even there it trailed significantly behind other Democratic candidates and causes.

Take note President Napoleon, even the bluest of states aren’t on your side on your amnesty battle.